This is what I read at Barry Hines’ funeral. I suppose each of us has a different Barry in our heads, in our memories.

For me, visual images pop up. His bright blue, headlamp eyes; the slight curl of his mouth revealing his bone dry humour poking through.
Or scenes, mini narratives, encapsulating his essence.
In 1975, as now, we were offered a referendum. Stay in Europe or leave. A few of us were arguing the toss, no doubt generating more heat than light as the drinks went down, and someone noticed that Barry hadn’t said a word all evening.
“Come on, Barry, what do you think? Should we stay in Europe?”
“I don’t think we’ll bother in Yorkshire”.

And he was Yorkshire, South Yorkshire, Hoyland Common Yorkshire. Mind you, he despised professional Yorkshiremen – you know, the ones on the BBC, with accents in Sunday suits, pontificating about the “essence of Yorkshire” and boasting about “Yorkshire grit”.
When we finished Kes, the distributor insisted we revoice it, saying no one would understand a word as it stood. Needed subtitles south of Nottingham, apparently. I didn’t want to do this. I doubt if I could have persuaded Ken to do it. But the clincher in my adamant refusal was I didn’t want to face Barry. His contempt at the very idea of this betrayal would have hit me like napalm.

He loved round here. He never wanted to be far from Hoyland Common.
He’d lived elsewhere. Of course he had. He’d even been abroad.
Sheffield…..London… even further.
I’d come up here to work with him and he would take me to the Club. We’d walk in to silence, just a nod between him and the handful of men, looking carefully at the pint glasses in front of them, as though they had them in custody. Occasionally one would throw in a sentence and it would ripple like a pebble in a pond. Others would nod their acknowledgment of its wisdom. I couldn’t stand it. So boring. But Barry, this man who lived by words, was content. For him it was reassuring. He was home.
So, It’s appropriate he ends up here.

Now he’s dead. Finally dead, though he didn’t give up without a fight. It was painful to see him so reduced. But occasionally his wit and anger and spirit used to erupt, reminding us of our Barry.

His writing lives. These loving testaments to mining communities in the middle of the twentieth century are still read, fifty years later. They will be read a hundred years from now.
He wrote a simple prose. There was a purity to it. HIs dialogue was alive with actual speech patterns. It rang true.
And though largely unnoticed, Barry’s work was poetic – if poetry distills language, keeps it honest and come to life through images.
In A Kestrel for a Knave he describes a toddler belting down the pavement on his tricycle, “his little legs going like bees wings”. Instantly, the lad vividly springs to life.
And of course, the kestrel itself. It’s Billy Casper’s story, but it is the kestrel, incidentally and appropriately the lowest in the hierarchy of hawks, that carries the book.
It was a sustained metaphor, central to the narrative. That tiny bird is the essence, the whole distilled meaning of the novel.
The novel’s soul.
Barry was, and saw himself, a craftsman. He went to work every day to mine those words, dig them out of the language. 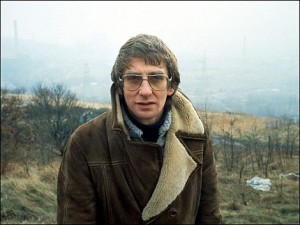 We’ll all miss him in our own way. In fact, I’ve missed him for some time.
With Ken and Lesley on the train this morning we reminisced, and we’ll no doubt do so again.
Barry and I first met in the middle 1960s. Fifty years ago. We instantly got on and never had a cross word. I don’t know why.
We all have many acquaintances. But only a handful of friends.
Barry was one of them.

One Response so far.