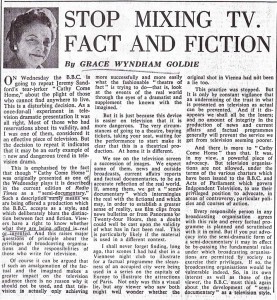 ON Wednesday the B.B.C. Is going to repeat Jeremy Sand-ford’s tear-jerker “ Cathy Come Home,” about the plight of those who cannot find anywhere to live. This is a disturbing decision. As a once-for-all experiment in television dramatic presentation it was all right. Most of those who had reservations about its validity, and I was one of them, considered it an effective piece of television. But the decision to repeat it indicates that it may be an early example of n new and dangerous trend in television drama.

This is emphasised by the fact that though “Cathy Come Home” was originally presented as one of the Wednesday plays it is described in the current edition of Radio Times as a “semi-documentary.” Such a description surely means we are being offered a production which the B.B.C. accepts as a style, and which deliberately blurs the distinction between fact and fiction. Viewers have a right to know whether what they are heing offered is real or invented. And this raises major questions of principle about the privileges of broadcasting organisations and the responsibilities of those who write for television.

Of course it can be argued that if such an amalgamation of the factual and the imagined makes a greater impact on the television audience there is no reason why it should not be used, and that television is actually only achieving more successfully and more easily what the fashionable “theatre of fact” is trying to do — that is, look at the events of the real world through the eyes of a dramatist and supplement the known with the imagined.

But it is just because this device is easier on television that it is more dangerous. The very circumstances of going to a theatre, buying tickets, taking your seat, waiting for the performance to start make it clear that this is a theatrical production. At home it is different.

We see on the television screen a succession of images. We expect some of them, news and outside broadcasts, current affairs reports and factual documentaries, to be an accurate reflection of the real world. If, among them, we get a “ semi-documentary ” which intermingles the real with the fictional and which may, in order to establish a greater sense of reality, use film clips from news bulletins or from Panorama or Twenty-four Hours, then a doubt could well be cast upon the validity of what has in fact been real. This is particularly likely if the material is used in a different context.

I shall never forget finding, long ago, that scenes I had had shot in a Viennese night club to illustrate for a factual programme the sleaziness of an occupied city were being used in a series on the capitals of Europe to illustrate the attractions of Paris. Not only was this a visual lie, but any viewer who saw both might well wonder whether the original shot in Vienna had not been a lie too.

This practice was stopped. But it is only by constant vigilance that an undermining of the trust in what is presented on television as actual can be prevented. And if it disappears we shall all be the losers; and no amount of integrity in the production of news and current affairs and factual programmes generally will prevent the service we get from television seeming poorer.

And there is more to “Cathy Come Home” than that. It was, in my view, a powerful piece of advocacy. But television organisations are not allowed, under the terms of the various charters which have been issued to the B.B.C. and Acts of Parliament which govern Independent Television, to use their privileged position to advocate, in areas of controversy, particular policies and courses of action.

The Day the Music Died is the memoir of BBC director and producer, Tony Garnett. For the first time, Tony shares exclusive details from his childhood in working-class and war torn Birmingham. He takes readers behind the scenes of a selection of his more famous productions, offering secrets and anecdotes. Some moving and some amusing. Now available for pre-order on Amazon.