Alison Briggs meets writer Tony Garnett who, from CATHY COME HOME and KES to COPS, has forged a career out of gritty reality. 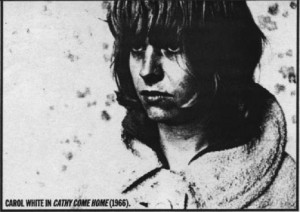 At the heart of London’s bustling Strand, a stone’s throw from the Savoy Hotel, lie the offices of World Productions. Inside, Tbny Garnett is bogged down with paperwork and telephone calls.

It’s hard not to be in awe of Garnett. With a body of work spanning four decades and boasting such landmark productions as Cathy Come Home, Kes, Up the Junction and more recently, Between the Lines, This Life, and now Cops, he is considered by many to be a TV legend. But it’s not just his CV which is daunting. Within the industry, Garnett is also renowned for his aversion to the press.

He rarely gives interviews and I’ve already been warned that he’ll talk so long as I’m not after doing a life story, wankerama- type” piece. So I’m relieved he welcomes me, on time, with plenty of smiles.

A slight figure in a red and white gingham shirt, Garnett isn’t the stereotypical image of a TV exec; he’s more like your favourite teacher.”It’s not that I hate the press,” he says reassuringly, “I just can’t believe anybody is interested. On TV, people will watch what they want to watch, and anything I say doesn’t make any difference.”‘

The words “gritty” and “controversial” Utter descriptions of Garnett’s work. With its depictions of drug-taking, violence and bad language, the Bafta award-winning Cops is no different. That Cops is about cops is almost incidental. Garnett had wanted to do a show about aspects of society he felt had been overlooked – both by television and the government. Packaging the programme as a “cop show” was his way of selling the idea to broadcasters – it’s what he calls “Trojan Horse” drama.

“What these cops are doing is taking us into places like the [fictional] Skeetsmoor estate, for us to meet people who are in difficulty in their lives, through unemployment, poverty, class oppression … so it’s using the genre of a cop show to look at the underside of Blair’s paradise.

“This Government was so desperate to get into office it would have sold its first-born to get the chauffeur-driven cars into Whitehall. It cares more about what ‘middle England’ and the prosperous people who might vote Tory than the people who are living in areas like the Skeetsmoor Estate.”

It’s ironic then that Garnett broke into TV on the kind of knee-bending, clip-round- the-ear cop shows from which Cops is such a radical departure.It was acting in Z Cars and Dixon of Dock Green, among other things, which allowed Garnett, the son of a tool-maker, to move from his home city of Birmingham to the capital.

“After sixth form, I ran away to Rep, then I decided to go to University College as a way of getting to London to act on the telly, which is what I did when I was a student.

“I was registered for psychology but didn’t go in much. I turned up for finals though because I was given a scholarship and told if I didn’t sit the exams they’d want the money back.”

That the name Tony Garnett is synonymous with politically loaded work, perhaps owes more to his earlier portfolio than with his more recent cult favourites. In 1963, after 10 years as an actor, Garnett moved into producing, on BBCl’s Wednesday Play, the start of a partnership with director Ken Loach.”Very few actors in the world can influence events and I knew I was not going to be one of those,” says Garnett.

“I was excited by the opportunity to decide what we did, rather than how we did it.”

If his intention as a director was to influence events, Garnett succeeded with Cathy Come Home, which told of one woman’s fight – and ultimate failure – to secure a home for her family. First broadcast in 1966, it’s accredited with stopping the local authority practice of separating thousands of husbands from their families; boosting the launch of homeless campaign group Shelter, and bringing about the 1977 Homeless Person’s Act, which places a duty on local authorities to find housing for homeless families. “The impact of Cathy took us all completely by surprise,” admits Garnett. More than 30 years later, Garnett is, by his own admission, “still ploughing the same furrow”. It’s just that now he’s using different tools.

“When I first started out, the political agenda got in the way of the drama. We did too many films where the action stopped for a political speech. “Now, I think the best drama asks the good questions rather than give the pat answers.” With Cops, his third police- based work, (after Law and Order and Between the Lines), Garnett has bypassed the cliches of the detective format, in an attempt to show the difficulties of front-line policing.”I thought it would be interesting to see the human beings behind the uniform. Bobbies are working-class people. Whatever I might think politically, about the functions of the police, the bobby’s somebody who just applied for a job.”

While Cops was acclaimed by viewers and TV critics, it left a nasty taste in the mouth of Greater Manchester Police’s PR department, which helped with research for the first series but has now withdrawn support. They might have expected a “warts-and-all” portrayal, but as a spokesperson says: “We hadn’t been told that from the beginning, it would be warts and warts and warts.”

Garnett insists the programme is grounded in reality: “I say to the writers, “we’re going to research and research and research, then come back and make it up’.”But going out with the officers and talking to them, there were so many stories that very few of them had to be made up.” The police were particularly incensed by a storyline in the second series, in which a black WPC is handcuffed to railings by her colleague.

Following the Stephen Lawrence Inquiry, and Chief Constable David Wilmot’s admission the force suffers “institutionalised racism”, it has launched, “Operation Catalyst”, which aims to encourage more black and ethnic recruits (who currently constitute just 2.4 per cent of the force) and restore public confidence. Some officers believe the programme under­mines their efforts. “Behind that objection is a wish to have a programme that is a PR job for the police … but I am not in the public relations business,” says Garnett. “That character was not the knee jerk liberal’s idea of a black recruit, it was a much more complicated stray – she was a manipulative little bitch.”We’ll know we don’t live in a racist society when we can have very unpleasant black characters on the screen.”

That Cops has provoked such debate has delighted Garnett. If the best drama, as he says, asks the best questions, there will in turn, be a mixed bag of responses. It’s clear he sees his role as an observer – the rest is up to us. Asked the motivation behind his work, his response is simple: “I am curious, I want to know. “One of the traditional functions of drama is that it recognises we are all unique, and through drama, I can get an inkling of what life is like for somebody else. That makes us understand people a bit better.”

It is this curiosity which made Garnett, now 63, produce This Life – a programme about twenty-somethings. Garnett will only work on two series of a show – any more, and he becomes bored, he says. He has handed over the third series of Cops to his colleagues, leaving him free to move on to his next challenge.

While Garnett believes politics will always influence his work, he is well aware of how much it can change society. He only has to reflect on Cathy Come Home to realise the limitations of television. While it addressed and ultimately changed local authorities’ attitudes to re-housing families, its long-term impact is debatable. Figures compiled by Shelter show thousands of people sleeping rough in England each night, and more than 50,000 people living in temporary accommodation.

“Those were the days when we were young and naive and arrogant enough to think we could make a film and change the world. This is reality and film can’t do that.”

It is, he believes, the state’s responsibility to solve society’s problems: “Everybody having a decent place to live could easily be achieved but it would have to be a priority over buying, and selling and the idea of the deserving and undeserving poor.

“And that would have to be an act of political will.” ■